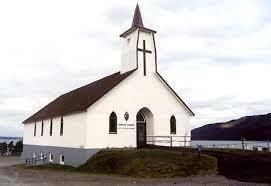 This Sunday we'll be joining Topsail United Church for their worship service. They will be livestreaming at 10:30 Newfoundland time, which is 6:00 a.m. Comox time - so we'll probably watch it later, after it's been uploaded to their website. You can access it here: https://www.youtube.com/channel/UChHzJoaa8QGZfmHbt5OC5bg

Here's a bit of Topsail's history:

Topsail United Church – “The Church by The Side of The Road” – had its beginning in 1837 with the formation of a small Wesleyan Methodist Meeting House. But even before this, the early settlers, with assistance from visiting clergy from St. John’s, had been holding church services in various homes throughout the small community.

Land for the Meeting House was donated by the Butler family, and this land, overlooking the picturesque Conception Bay, was large enough for a cemetery as well. Throughout 1836, people of the community worked hard to erect a small church – a modest building measuring 30 ft. x 18 ft. and constructed from local timber.

By 1860 though, this little church was getting too small for the growing congregation, and it was decided to construct a larger church building. This new building was opened in 1871 and contained two rooms – the church sanctuary and the Sunday School. Services were conducted by Rev. William Faulkner, minister of Gower Street Church in St. John’s. This little church became a well known landmark throughout Newfoundland and was given the name “The Church by The Side of The Road.” The name remains to this day.

In 1886 the Topsail Church hired its first resident minister, The Rev. Dr. Mark Fenwick, and at the 1886 session of the Newfoundland Conference of the Methodist Church of Canada the Topsail church was constituted as a separate parish or, as it was called in those days, a separate circuit. Under the ministry of Rev. Fenwick a minister’s residence was started but was not completed until after the arrival, some three years later, of the Rev. Samuel Snowden. In 1925 the Topsail Methodist Church, along with all other Methodist churches in Newfoundland, joined the newly established union with the United Church of Canada.

As time passed, the Topsail congregation once again outgrew their little church and the decision was made to construct yet another new edifice. This new larger building, which exists to the present time, was opened for worship in 1977. The old brass bell, rung so faithfully by people like Harold Somerton and Bert Perry, was moved from the old church, and still rings out from its tower on Sunday morning as it has done for all these many years. So, too, the Church’s message of salvation, of love and hope, still echoes loud and clear from the sanctuary.

In the Spring of 2002, the manse was sold and the offices were moved into the Church. Additional space was added to the back of the building; including a new kitchen, caretaker’s closet and a coat check in the basement and stairs and an elevator leading up the new offices for the minister and office administrator along with a new Conference Room and choir closets.