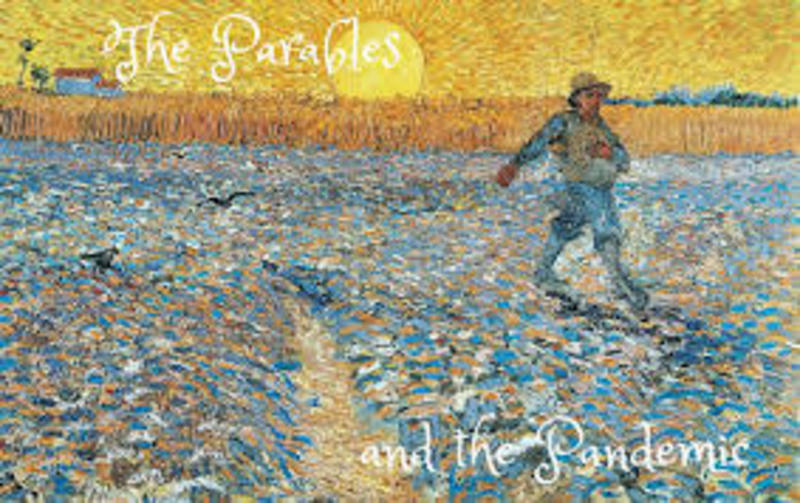 That same day Jesus left the house and went to the lakeside, where he sat down to teach. 2 The crowd that gathered around him was so large that he got into a boat and sat in it, while the crowd stood on the shore. 3 He used parables to tell them many things.

“Once there was a man who went out to sow grain. 4 As he scattered the seed in the field, some of it fell along the path, and the birds came and ate it up. 5 Some of it fell on rocky ground, where there was little soil. The seeds soon sprouted, because the soil wasn't deep. 6 But when the sun came up, it burned the young plants; and because the roots had not grown deep enough, the plants soon dried up.

7 Some of the seed fell among thorn bushes, which grew up and choked the plants.

8 But some seeds fell in good soil, and the plants bore grain: some had one hundred grains, others sixty, and others thirty.” 9 And Jesus concluded, “Listen, then, if you have ears!”

This story of a sower who went out to sow is quite a familiar one, isn't it. Jesus liked to use stories to teach, and this story, like many others he told, is referred to as a parable ~ a comparative story, one that uses metaphor. Parables are fascinating because they are the closest glimpse we have to the exact words of Jesus. No one was recording what he said as he said it, it all came through oral tradition, nothing was written down in the gospels until 40 years later at the earliest.

Something many people don't realize about parables is that they were intended to be thought provoking. CH Dodd, a well known 20th century theologian, said a parable was meant to “leave the mind in sufficient doubt about its precise application to tease the mind into active thought.”

Or as modern Biblical scholar Bernard Scott puts it, a parable “is not really about what it seems to be about.” Jesus wanted to shock his audience with his parables, make them think and look at their world and their faith in new ways.

So if we want to really understand what a parable is about, we need to understand what was shocking about it when it was told, and in order to do that, we have to try and put ourselves in the mindset of Jewish society in ancient Israel.

Think of the parable of the Good Samaritan, for example. We don't get the shock value anymore because it's so familiar, but imagine telling the story at the Democrat convention in the US and giving it a modern twist. Imagine telling it with Joe Biden being the man who is beaten and robbed, good Democrat politicians who pass him by and who rescues him? Trump!

That's how shocking that story was to Jesus' listeners. No, no, no! That's not possible! A despised Samaritan rescuing a good Jew was as unthinkable to Jesus' audience as the idea of Trump rescuing Biden in a kind and compassionate manner would be to Democrats.

And that's what Jesus was aiming for each time he told a parable, to get people thinking, get them out of their comfort zone, get them asking themselves, what the heck does he mean? There are no right answers in interpreting parables, only good questions. Jesus didn't want people to just memorize what he said, he wanted them to think, to question, to figure things out for themselves and their lives.

For the story of the sower, we need to put ourselves in the mindset of a farmer. I don't know much about farming myself, but I have cousins who farm in Manitoba, and I have seen the pride and care they take in their land and in their work. I cannot imagine my cousin Marv being like the sower in this parable, planting seed on his driveway or in an obviously rocky area or among thorns. It would be irresponsible, wasteful.

I don't think that was normal practice at the time of Jesus either. Seed was even more precious back then, you couldn't buy it from the Feed store, you had to keep back part of last year's harvest, even in the spring when your family was hungry, so every seed was precious.

Many peasants in Jesus' society had recently lost land to large estates. So many people in Jesus' audience would have either been peasants with their own very small farms, or former peasants, who had lost their land to rich estate owners and were now day labourers. They were people who knew farming, they were also people who knew loss.

This story would have shocked them, why would the sower scatter seed in such obviously inappropriate places? There was no way a farmer would waste seed like that, scattering it indiscriminately, thoughtlessly. It would have made no sense to them at all.

If we look at the parable of sower with an awareness of how Jesus' audience would have heard it, we have to ask those same questions - why the heck did the sower sow seed so poorly, so ineffectively and wastefully? What's that about?

Then we need to look at what questions stem from that for us, remembering there is no such thing as a stupid or wrong question. Some questions that arise for me are – If the story is about the seed, is Jesus saying to share our faith even when it doesn't look like promising soil?

Or is the story about the soil? Could the sower see how bad soil was? The path would be obvious, but the shallow soil? Or the thorns about to grow up? Maybe we don't know what kind of soil is there until we see what grows.

Or is it about the sower? Could the story be about abundance and possibility rather than waste?

These were some of the thoughts that came to me as I tried to listen to the parable with new ears, with ears attuned to Jesus' original audience. Then I tried to take this new approach and look at the parable from the point of view of our times, Covid times.

The pandemic has completely disrupted our world, yet over the past four months we have seen that Covid has given us the potential to sow something positive. It's been better for the planet - less pollution, less use of fossil fuels. It's been better for people – slower pace, not so busy, being more aware of looking after each other.

How have we responded to this “seed” which life has thrown at us? A seed which has caused so much chaos and loss, but also has the potential for something positive?

Some of us have been like the path, nothing positive has taken root. We've just had too much fear and anger, we feel overwhelmed. A lot of that is situational. Some of us have had the privilege of seeing Covid as a “retreat” time, but others have lost work or had to work twice as hard at a job that has all sorts of new challenges and risks. Some have lost their own lives, some have lost loved ones, lost homes. So it is understandable if some people have felt like the path, that nothing positive about Covid has taken root in their lives.

Then there's the rocky ground, where the seed springs up quickly, but doesn't last, and ends up dying. That describes many of us, doesn't it. Through March and April there were all sorts of great videos, music, Facebook and Instagram posts about how we were going to use Covid to change the world, make it better, we were going to get used to going out less, using cars less, making do with less – but how long did that last?

Most people were eager to get back to life as usual, or as close to usual as we could, once some restrictions were lifted. In the end many of our great intentions dried up and died. We weren't so keen to stick to the new way of living after all.

How about the thorns? That could describe many of us who embraced the slower lifestyle, but who are getting right back into being busy as soon as possible. Our desire to slow life down is getting choked out by the possibility of doing more again.

We haven't been at it long enough to know if any of us are good soil that will produce long lasting fruit, if there will be any long lasting, positive changes come out of these Covid times.

Does the fact that most of us fall into the first three poor categories of soil mean we give up?

No! Because one thing that struck me about this parable is that the sower never stops sowing. He or she doesn't say, man, some of that seed fell on path, I better pick it up, or I better stop sowing. He or she just keeps sowing. And that struck me as being very much what Jesus is about. Jesus is always about hope, so even if we have been a bit shallow or lost our enthusiasm for change or even if we've let birds take the seed away and we're trying to ignore Covid and its chaos, it's never too late to change and try again.

I think this parable is all about hope – hope for shallow soil and rocky soil and thorn filled soil. God is a farmer who sows seed indiscriminately, who never gives up on us, even though most of us aren't great soil.