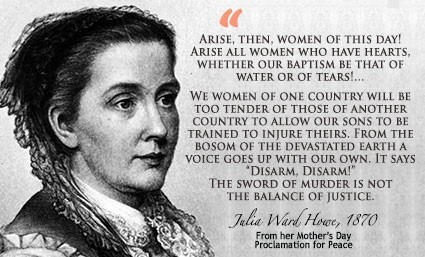 Mother’s Day is a celebration that has been observed in countries around the world for more than 100 years. It has become a day of flowers and cards and taking mum out for brunch, but this is definitely not how this special day began.

It was launched in 1870 in the United States as a call on mothers everywhere to unite in promoting world peace. At that time social justice advocate and feminist Julia Ward Howe (the author of the Battle Hymn of the Republic) envisioned what she called a “Mother’s Peace Day,” a day to honour and support mothers who had lost sons and husbands during the American Civil War.

Julia Ward Howe issued an inspiring “Mother’s Day Proclamation” which read, in part:
“Arise, all women who have hearts,
whether our baptism be that of water or of tears!
…Our sons shall not be taken from us to unlearn
all that we have been able to teach them of charity, mercy and patience.
We, women of one country, will be too tender of those of another country
to allow our sons to be trained to injure theirs…”

This call for a Mother’s Day grew over the next thirty-five years and became recognized officially under the leadership of Anna Jarvis as she committed herself to honour her beloved mother who had worked with Julia Ward Howe. Sadly, Anna Jarvis would later spend the rest of her life fighting the holiday’s commercialization and political exploitation.

While Mother’s Day has certainly lost its early edge for justice maybe it isn’t too late to reclaim that original call for peace at this time when our world is engaged in costly and devastating wars and communities are torn apart by violence.

Maybe this second Sunday in May can be a time to dedicate ourselves to peace, on behalf of mothers, fathers, sons and daughters everywhere…time to rise up and protect our most vulnerable…time to speak up against violence in every form…time for truth-telling and giving witness to injustices in our communities…time to not only notice the differences that divide us but to also affirm the goodness and sacredness in the spaces between us.

This weekend, as I remember my mother, and her gifts in my life, I can think of no better way to honor all our mothers than to dedicate ourselves to nurturing peace between families, between neighbours, between communities, between nations.

Patient Waiting In the Beginning was the . . . . When the Preaching is Bad