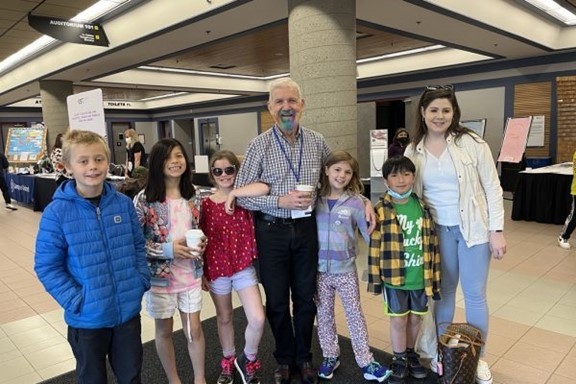 The Annual General Meeting of the Pacific Mountain Region (representatives from all United Churches in BC) took place from June 9 to 12. The meeting was held in a hybrid format, with about 120 people online and an equal number in person in Prince George. Joanne Wiens and Cathie Talbot attended on-line on behalf of Comox United Church.

The theme was “Rooted and Grounded in Love” based on Ephesians 3 and the guest speaker, Jeff Chu, provided four sessions of moving reflections on the experience of God’s Divine love and our own belovedness. He explored the “theology of the compost pile” (what we need to let go of in order that it can be transformed), the resurrection inherent in seeds, and ways in which we can cultivate “holy imagination” that is generous, hospitable, and seeks the flourishing of all creation. Jeff is co-host, with Sarah Bessey, of Evolving Faith.

A main focus of the meeting was the celebration of becoming an Affirming Regional Council which means that people will be fully included in all aspects of the Region’s life, leadership, and ministry without limitation based on identity, expression or orientation, and safer spaces of belonging will be intentionally provided for members of the 2SLGBTQAIP+ communities and their families.

Other guest speakers included Michael Blair (General Secretary of the United Church of Canada) who highlighted initiatives of Anti-Racism work, pay equity for ministers, and the current reality of many lay-led congregations; Vicky Nelson (Animator for Stewardship and the Mission and Service Fund for the 4 western provinces) who highlighted that the United Church has given over one million dollars of support to Ukraine and provided over 70,000 Covid vaccines in vulnerable countries; and Amanda Burrows, Acting Executive Director of First United Church in Vancouver, who spoke about the First Forward redevelopment project which is replacing the original church with an 11 story social housing building with four floors for the First United’s services and 100 units of Indigenous housing.

There were five Proposals to be voted on by the delegates (these are issues which are brought to the meeting by members of communities of faith for action by the Regional Executive body) and all were approved after discussion.
•    Shared Ministries—providing more support for ecumenical shared ministries (e.g. United Church-Anglican)
•    Meetings—holding hybrid annual general meetings (online and in-person) for the next three years, to be evaluated in 2025
•    Climate Change—strongly encouraging all churches to engage in thoughtful action and advocacy in response to the climate emergency
•    Communities of Faith—providing more support for congregations to flourish
•    Drug toxicity—helping communities of faith address the drug toxicity crisis

Deborah Richards, a lay person from the lower Mainland, is the new President of the Region.

Rev. Dr. Carmen Landsdowne, Executive Director of First United, has been nominated by the Pacific Mountain Region for Moderator of the United Church of Canada.

Patient Waiting In the Beginning was the . . . . When the Preaching is Bad