Ecumenical Response to Demonstrations across America and Canada 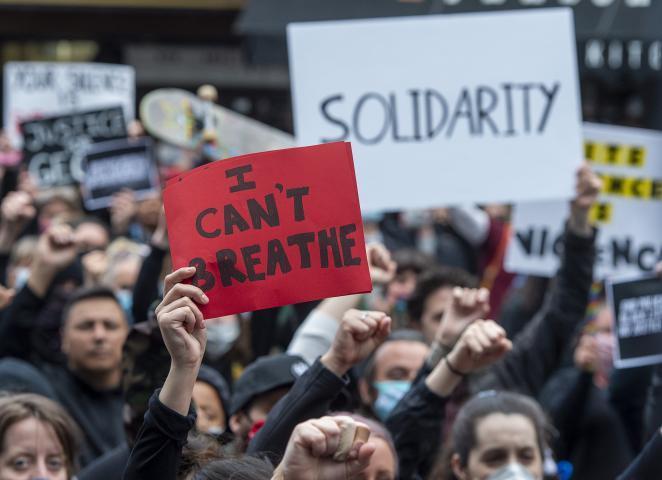 “George Floyd’s words, ‘I can’t breathe,’ continue to ring in our ears.”

In response to the demonstrations across the United States and Canada in the wake of the May 25 death of George Floyd in Minneapolis, the leaders of the Evangelical Lutheran Church in Canada, the Anglican Church of Canada, and The United Church of Canada have issued a joint letter.
They write, “It is important for church members in our largely white churches to look at how we continue to perpetuate anti-Black racism, either inadvertently or intentionally. George Floyd’s words, ‘I can’t breathe,’ continue to ring in our ears; they act as a prophetic voice of the pain and re-traumatization that is coming from peoples of African descent again and again.”
In March, these same church leaders sent a letter asking churches to engage with the International Decade for People of African Descent. This new letter offers tangible ways for individuals and congregations to begin conversations and really listen to the stories that emerge.
Moderator Richard Bott adds: “I am asking people in the United Church to delve into this topic individually and at church boards. If we don’t look at this issue and realize we are part of the problem, we can’t be part of the solution. This is the work of White members of the church, and the time has come to commit ourselves to this work, for everyone's sake.

The events taking place across North America in response to the murder of George Floyd have given all of us a stark reminder of the ongoing sin of racism in our communities. Centuries of anger at injustice and anti-Black racism are literally bursting into flames as people stand for political and cultural change to address these deep-seated systems that work to oppress so many members of our communities. Coupled with the death of Ahmaud Arbery, the threat against Christian Cooper who was participating in a park activity so many of us take for granted, and so many other day to day activities, we are reminded of the horrendous consequences of anti-Black racism again and again, depriving people of their safety, their freedom and their lives.

We as church leaders, acknowledge the pain, frustrations and anger of our Black communities, and recognize that systemic anti-Black racism is prevalent in our context in Canada as well; in the streets of our communities, in the justice and policing systems, and in our congregations and parishes. It is important for church members in our largely white churches to look at how we continue to perpetuate anti-Black racism, either inadvertently or intentionally

George Floyd’s words, “I can’t breathe,” continue to ring in our ears; they act as a prophetic voice of the pain and re-traumatization that is coming from peoples of African descent again and again. The voice is weary and tired. “We can’t breathe” is the collective chant of peoples of African descent, especially those in North America, as they continue to struggle against centuries of racism and systemic discrimination.

We are hearing the same voice from ministers of African descent, particularly as they pastor predominantly white congregations. This voice is tired of violence towards Black lives. This voice is tired of the exclusion of people of African descent in our structures of leadership. This voice is tired of the emptiness that comes from supposed allies who aren’t willing to acknowledge their own privilege and responsibility.
As Primate of the Anglican Church of Canada, The National Bishop of the Evangelical Lutheran Church in Canada, and Moderator of The United Church of Canada we want to affirm our commitment to ending our silence about and working towards the dismantling of anti-Black racism.

In March, we jointly released a letter in support of the International Decade for Peoples of African Descent, acknowledging the reality of racism in our institutions and committing ourselves to naming and working towards the eradication of anti-Black racism. We are inviting the members of our communities to join us in this commitment by visibly and concretely demonstrating the call for solidarity in the UN decade. Some suggestions are:
• Reach out to a friend of African descent and listen to their story and how these events have affected them. This is also a good practice for primarily white congregations whose minister is African descent.
• Conscientiously and prayerfully consider joining public expressions of solidarity towards seeking justice against anti-Black racism;
• Read books and other materials on Black history in the Canadian context, the impact of anti-Black racism, and the reality of white privilege;
• Research critical elements of Black legacy;
• Engage with the artistic and cultural production of people of African descent, with a commitment to learn the history and context within these expressions.
We call upon our members to join with us in this commitment.
Sincerely yours,
The Rev. Susan Johnson National Bishop, Evangelical Lutheran Church in Canada
The Most Rev. Linda Nicholls Primate, Anglican Church of Canada
The Rt. Rev. Dr. Richard Bott Moderator, United Church of Canad

Sabbath -- The commandment we love to ignore! How you can help fight COVID-19 around the world Petition for medical and humanitarian aid for Palestinians and for the permanent lifting of Israel's blockade of Gaza

O CANADA Celebrating Pride Risking it all for Jesus